As March progressed and passed, and April followed–our city in full bloom with the flowers of thousands of ornamental trees– already tiny white and pink petals swirl in the wind and gather in the gutters–still a delight.

I’ve selected a few samples from those multitudes of glamorous, ephemeral blooms to peer at and study: 2 cherries, an ornamental plum, a pear (I believe) and a Japanese flowering quince. These plants all belong to the Rosaceae family which has more than 3,000 species under its wing, including representatives from some of our favorite food crops, like pears, apples, peaches, almonds and strawberries.

Kirk & Howes in their book, Plants for Bees, state that cherry is considered second only to apple trees as a nectar producer, and as such, is an important food resource for pollinators. The authors are, of course, speaking of the fruit-producing orchard trees. However, they state that even the ornamental trees are of similar value as bee plants, both for their nectar and for pollen.

Ornamental cherry. This particular cherry has a delicious sweet nectar in the cup of each blossom. The tiny drops taste almost of cherry liqueur. Quite amazing!

This sample below is from a wild cherry from my neighborhood. The leaves of the cherry have tiny red extra-floral nectaries on their stems that look like little bugs at first glance, but they are not, and their purpose has to do with defense against the plant’s enemies, herbivores. Apparently this sweet substance attracts ants, and they in turn, protect the plant from other insects in return for the sweet payment. An interesting symbiotic relationship!

Wild cherry (Prunus avium) The leaves have tiny extra-floral nectaries on the petioles.

The blossoms of this tree are very fragrant. I think it’s a plum tree – the leaves are coppery purple, and there are no horizontal lines on the trunk, like cherry trees have.  Kirk and Howes state that bumblebees, honey bees and mason bees gather the plum’s nectar and pollen.

The white blossoms of this tree are pungent indeed, and not favorably. Quite smelly actually. I think this might be a Pyrus calleryana? The anthers are a beautiful magenta/purple, but as they mature and dehisce their pale golden pollen, the anthers become dark little ragged ends.

Strong smell, described by one author as akin to rotting fish, but I didn’t find it quite that obnoxious.

Amazing number of stamens: 40-60 stamens in each flower, and 5 partially fused styles with 5 stigmas.

I had the great honor and pleasure of sharing 4 workshops on pollen this past weekend with artist and author, Lori Weidenhammer.  Lori gave me a copy of her new book, Victory Gardens for Bees, which I was thrilled to share with workshop participants. This beautiful and timely book will be on the shelves very soon. It is a fantastic compendium of gardening  information with the express aim of helping our native pollinators. The book is lushly illustrated with stunning photos, and it is a delight to hear Lori’s voice come through in the text.

The free weekend workshops Lori and I facilitated were offered through Artstarts at the New Westminster Quay location and at Artstarts downtown Vancouver.  We drew, stamped, collaged and embellished bees and flowers and made postcards and matching buttons.  Not only did we celebrate flowers, bees and pollen but we even got to celebrate the 20th birthday of ArtStarts four times!!!! 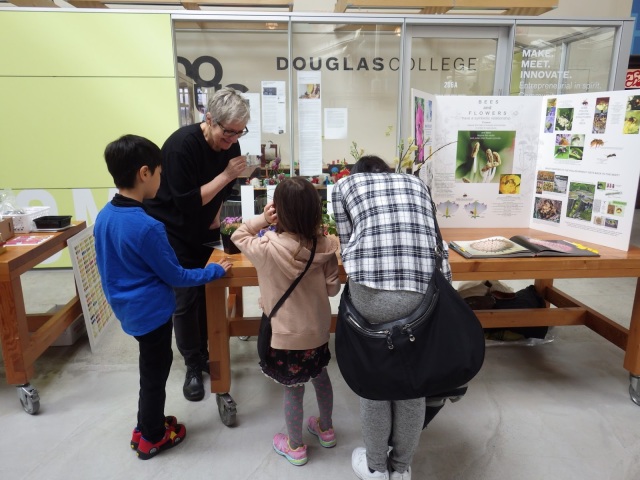 Looking at flower parts and pollen with a loupe. Photo: Lori Weidenhammer 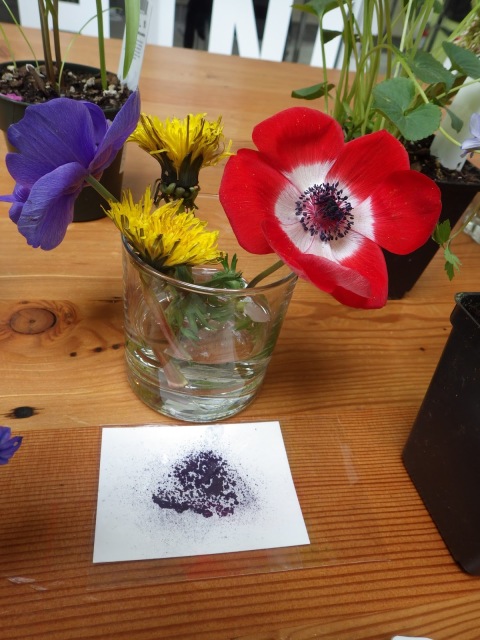 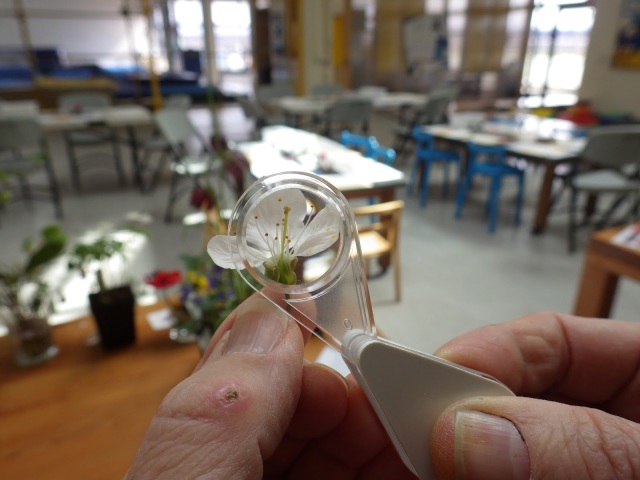 Peering at the stamens and pistil of a cherry blossom. Photo: Lori Weidenhammer 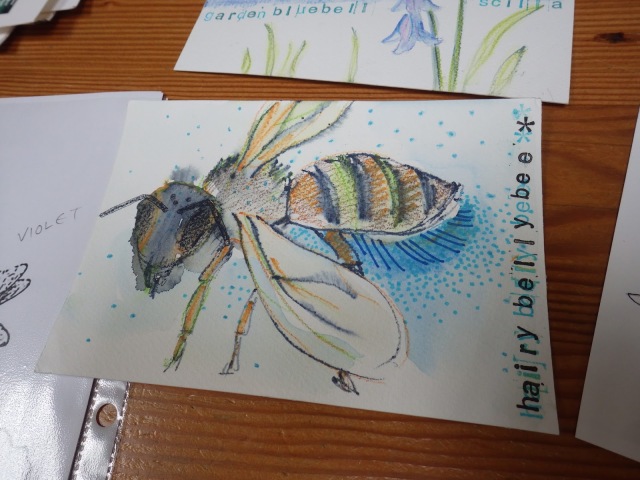 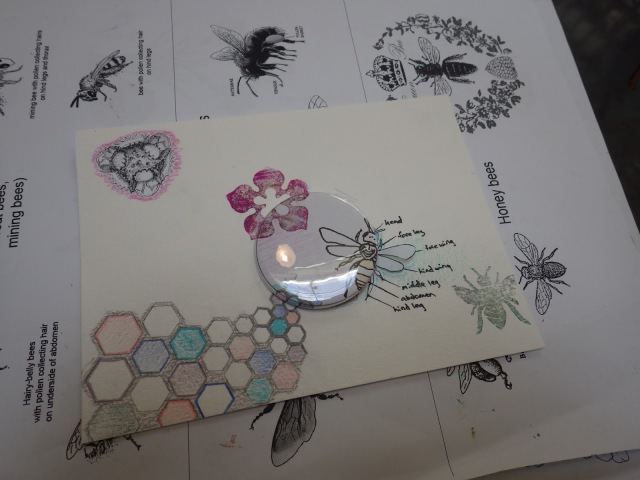 Artists of all ages participated – even Moms and Dads! Here’s a beautiful bee and flower themed postcard and button made by a Dad working along side his children. Photo: Lori Weidenhammer 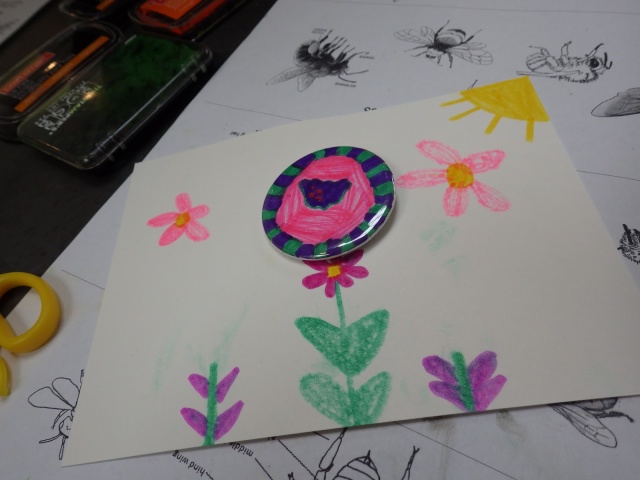 Beautiful bee, flower and sunshine postcard and button made by a young participant. Photo: Lori Weidenhammer 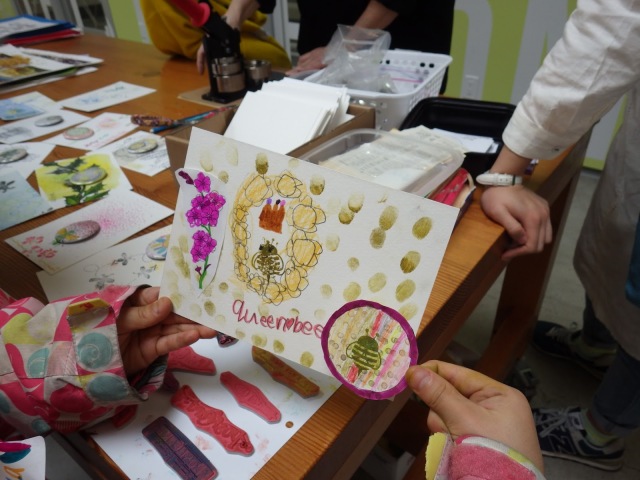 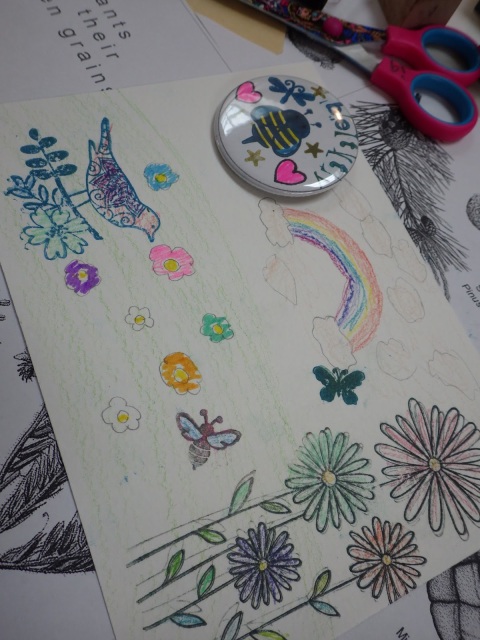 Lots of food for bees in this garden postcard. Photo: Lori Weidenhammer 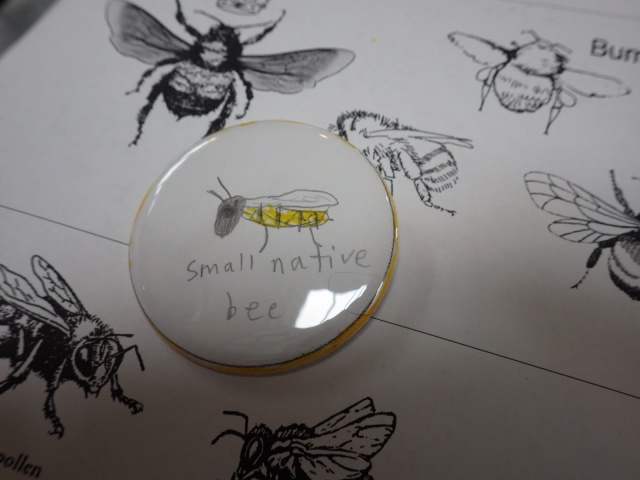 A beautiful button of a native bee made by a young artist. Photo: Lori Weidenhammer 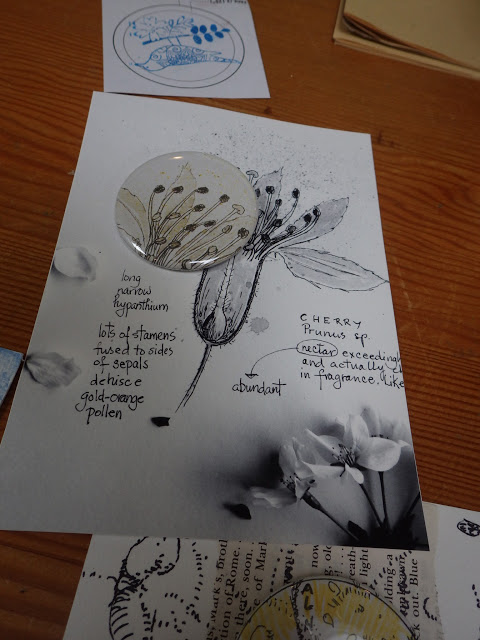 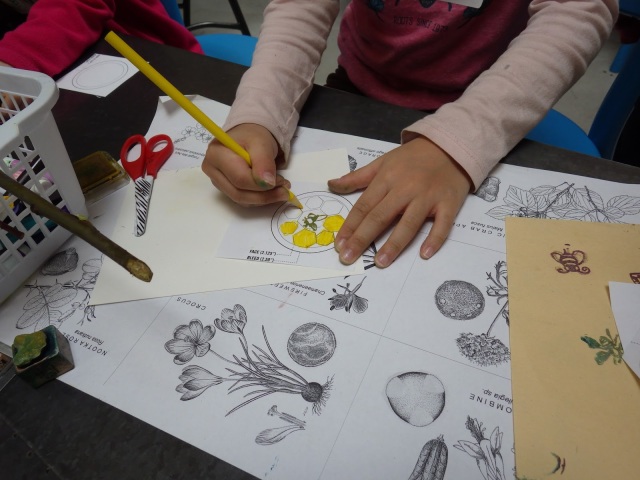 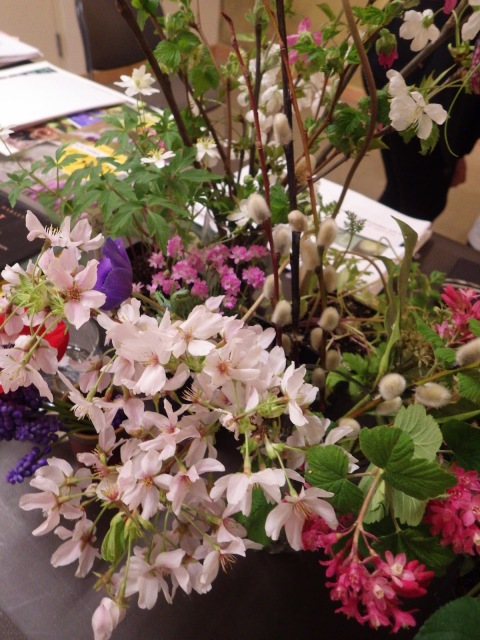 For exploration and drawing, a selection of flowers in bloom right now . Photo: Lori Weidenhammer 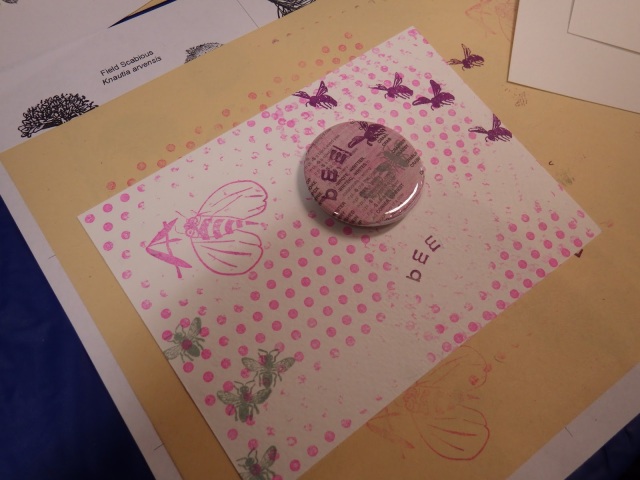 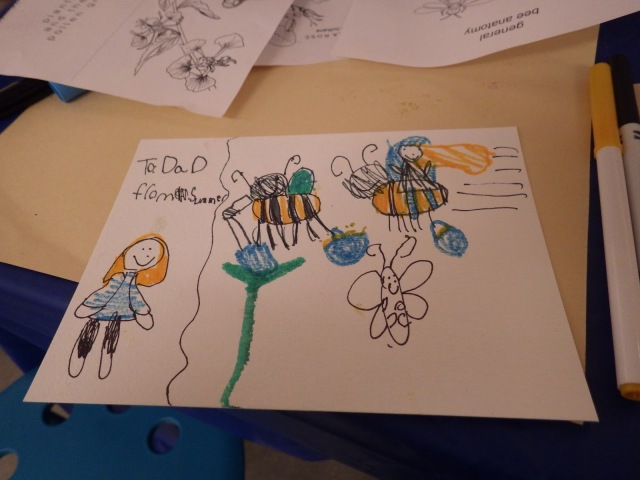 Self-portrait with super bees and flowers! There’s even a butterfly in this garden postcard. Photo: Lori Weidenhammer 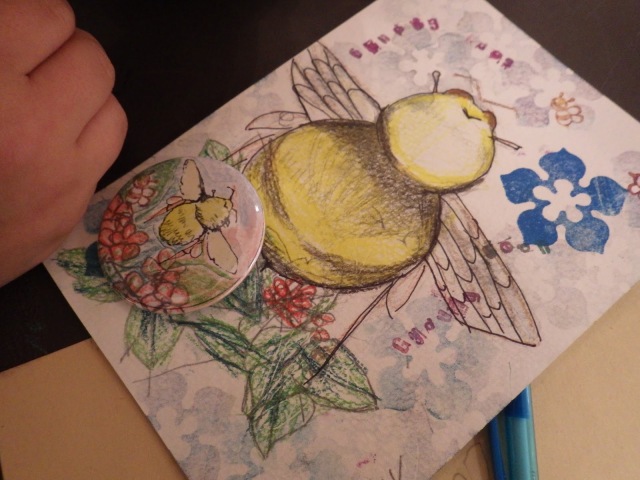 It’s great to see parents participate in the workshop. Here’s a beautifully drawn card and button made by a Mom working along side her own young artists. Photo: Lori Weidenhammer